Let's just tackle two Spiders with one review. I'm probably never going to abandon the Amazing Spiderman, it was one of the first comics I bought with my own money and I wish I had all of those issues today – such is the life of a collector. Back in the '90s (when I was much younger) I couldn't get enough of all the Spiderman / Ben Reilly 1994 - 1996 clone stories. At the time Mark Bagley designed the Scarlet Spider costume and I vividly remember his style of drawing. 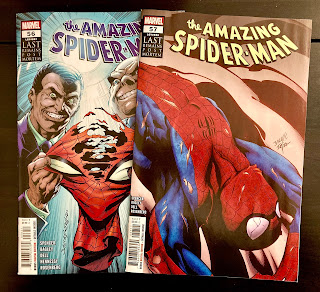 Well, here we are decades later and Bagley is drawing Spiderman again. Bagley's work is consistent but is starting to feel a little outdated, and not in a nostalgic way. I love old Romita Sr, Buscema, and Kirby comics just to name a couple – I'm having a harder time with Bagley this year. An example would be Arthur Adams, even though he seemed a bit snarky to me at a convention I went to, there is no doubt Adams' work is both masterful and has become better with age. Bagley's work feels stuck and in some areas backtracking. As for the story, it was fine, Nick Spencer did an okay job and the characters are matching up to what's expected. Last Remains Post Mortem Part 1 (issue 56) does feel like a post mortem, it's like watching people dance without music. I think the Spider pump is primed to be so much more than its current state.

Bottom Line: As a collector, there is nothing in this book to get excited about. If you are attached to the characters and are hoping that the best is yet to come then sit tight. They fixed the Venom run (click the link to read my review), so it is possible a new team can breathe some life back into this series.