When I recently decided to drive out of my way to visit a comic shop, as the one close to my house stopped selling comics months ago, I was returned to a world both familiar and exciting. I am an artist and writer myself and both of those skills started as a direct result of digesting comics in my youth. I'll admit I was a bit out of the loop and a little hesitant to pick up some of the titles I used to read in the past. I haven't been living under a rock when it comes to recent social/cultural movements, and I do not share the view that every nuance of life has to be viewed through, or serve a political agenda. Nor do I think that every word or interaction is a quest for power, as post-modern theory would have us believe. I would never fault someone for writing from their heart and mind, no matter what their personal or political views are. However, taking a well-known and even beloved character (without knowing the nuanced historic layers built up by artists or writers) then twisting that character into a metaphoric propaganda poster has consequences. I prefer it when writers and artists build, not destroy. 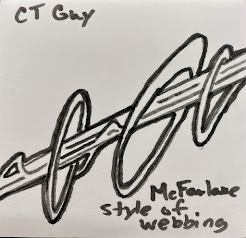 Todd MacFarlane as an example reworked Spiderman on his original run, building on that character's moral and visual strengths, not tearing it down. His stamp can still be seen today in the way artists tackle Spidey, including the webbing and contortion like poses. So why does my opinion on how a new creator treats an existing character matter? Perhaps it doesn't, but I think a good writer/artist combo can respectfully build on the past and give us (the readers) many new stories that maintain the integrity of the characters they are so fortunate to be entrusted with. Shoulders of giants as the saying goes.

That's my opening rant for this new review space. I won't be talking much at all about politics, agendas, or feuds – I'll leave that to reality TV. If you love great comics and comic-related events then I think you'll like this site. Keep it fun and focused fellow comic heads!