May the roll be with you

For years Darkhorse published Star Wars comics. There were some bright spots here or there in their publishing, but as a whole, I just never connected my Star Wars enthusiasm to the Darkhorse runs. There could have been many things that contributed to that feeling; mediocre art, disjointed writing, inconsistent timelines, or just sub-par editing. I never want to downplay anyone's hard work and making comics can be very labor-intensive if done right. 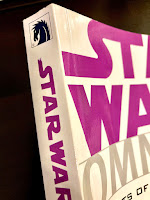 Darkhorse Star Wars just lacked the excitement and sense of adventure, place, and scope that made the Star Wars films so awesome. There was a different horse before the dark one held the license. Trusty old Marvel comics published Star Wars between 1977 and 1986 and are now publishing the franchise again, re-acquiring the rights in 2015.

Here is where my collecting bells go off, and not the bad ones either. When you can crossover the love of comics with the film/TV/action figure bedrock that Star Wars encapsulates it spells out potentially slow but steady investment growth. I think this will hold true over time, especially with graded comics from the original 77 to 86 Marvel run. Solid artists and writers worked on the series such as; Roy Thomas, Howard Chaykin, Archie Goodwin, and Walt Simonson to name a few. 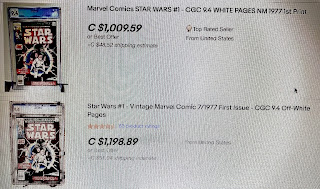 As of this writing, a slabbed (that means graded and sealed in a rigid holder) CGC 9.4 Star Wars #1 1977 first printing will run you about $1,000 Canadian dollars on eBay. Just like any collectible or investment, the price will fluctuate, and as I've said in my profile I am not an expert at anything really so view my writing as merely an individual opinion. Don't rush out and buy things or use me as a source to make decisions, do your own research.

Okay, so I do not have a thousand buckaroos to smackdown on a graded Star Wars #1. There are some affordable Key issues that are ungraded (or as collectors call raw books) that you can pick up. For those of you that are new to the hobby, a "Key" issue means that something important happened in that issue. Such as a first appearance, a death, and so on. For a collector who is not a hoarder, or does not want an 'intervention' from their family, space is always going to be an issue. If you focus on Keys instead of full runs you can store more bang for your buck in allotted space, while ensuring you are not left holding a bunch of books you can never sell. Personally, I do read comics and enjoy collecting simultaneously. I'm not taking them to my grave though, when I hit retirement age I plan on slowly selling my Key issues back into the market. I might hold onto a couple for family legacy if interest is shown from the younger generation.

My latest purchase is an exciting one, not the highest grade, but a slightly controversial Key. Those are the exciting ones for me, is it the official first appearance or not? I was picking up my weekly stack and flipped through the original Marvel Star Wars back issues sitting on the store's counter. I made a comment about how all the Keys were perfectly harvested from the run I could see, so nothing worth my dollars. I would love to have the entire run, but again I have to use the brain cells I have left to be selective and stick to my current collecting philosophy. Have a plan, my son! The owner pointed to the high rack above the counter where the good stuff is, comic shops are little like a bar in that sense, top-shelf bottom shelf. There they had Marvel Comics 1982 Star Wars #60, a sweet Simonson cover, and as I just mentioned the slightly controversial 1st appearance of Rogue Squadron. Or is it? 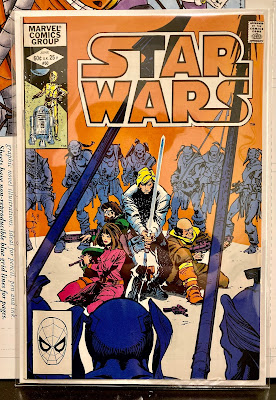 Key Collector app says that Star Wars #40 is the first appearance of Rogue Squadron. When you look at eBay #60 and #40 are listed as the 1st appearance. One thing is certain though, which is that #60 is the 1st appearance of the Wald & Hanc Thorben characters. Issue #60 seems to be trending higher and faster than #40. If both issues were in front of me and I had to choose I'd just pick up both, debate solved! Let's wrap this up – the #60 in the store looked great even though there was some spine roll, a pressing might fix that. Another customer who they trusted was in the store at the same time and he said I might get a 9.4 grade out of it post-pressing. I'm always a little more pessimistic about graders so I'm going to say a 9.2 at the most, maybe a 9.0. It was sitting with a $65 price tag, but they let me have it for $50 without me asking, roughly the current eBay price – but hey I don't have to pay for shipping and I can actually see the book in my hands. SOLD my friend! They even threw in a mylar bag to show they cared. It's the little gestures I appreciate. Stay focused fellow humans!