DC Future State: Superman Worlds of War is an oversized 64-page format issue with four stories. I sprung for the cardstock Federici variant cover which ran me about $12 Canadian dollars at a comic shop I frequent. As a collector, it looked like an awesome cover and the oversize format was expensive either way, card stock or not. After a full read-through, I will not be picking up the second issue. This book is a hot mess that went nowhere. All the stories inside were mediocre and it's the equivalent of buying a Spongebob Comic only to realize there is no Sponge or Bob to be seen. 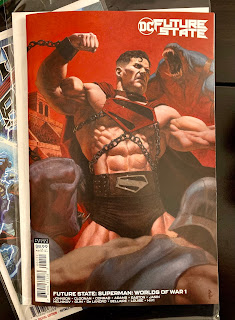 Superman was in a couple of frames and they cut that part of the story off before anything happened. Some of the "Superman" story (if you can even call it that) seemed like social check boxing with snoozy dialogue from characters that appear from nowhere. These characters then pontificate and theorize for multiple pages about Superman's attributes and possible death. I honestly did not want to write a pessimistic review about one of my favorite DC characters, but I don't want to pretend this was good. I'm not getting the impression that DC is taking this stuff seriously anymore, an editor should have said, "write it again." I have been reading about problems at DC over this past couple of months, but I suppose I just didn't want to believe the rumbles. If this book is any indication about how this ship is being steered, someone had better kick open the bridge door and wake the captain up, because the boatswains took a handful of strange fungus and are steering right into the only iceberg for a 1000 square nautical miles.

As a collector feel free to pick it up as the variant has a nice cover and it is a Future State #1, although I don't think this book will hold much long-term value. As a reader give it a pass and buy something from the back issue bin.